This programmer was designed for programming AT89S52 and AT89LP4052 chips using Atmel's A89ISP or ISP Programmer. I think it'll work with more chips of the same series, but I tested it only with the two mentioned. It is based on some circuits I found in internet, this among them.

Almost all the circuits of ISP programmers whic I found in internet use 74LS244 or 74LS544 ICs as buffer. I don't have neither of them, so I started to think which IC from those I have will do the same function. After some experiments I found that 74LS373 can be used as buffer as well, as two mentioned above.

So here is the circuit: Pins 9 and 11 of LPT port are connected together. Pins 18 to 25 are connected together and grounded. I added a switch that allows to chose whether the latches of 74LS373 will be in hi-Z state or not. It is useful when programming MC in the circuit. Important: parallel port has to be coufigured as EPP. When it is defined as standard, both programs don't work correctly. Maybe ECP mode will be good too. I didn't check it.

And this is the programmer I've done: I also added to this circuit power connector and 7805 to make it possible to use the programmer as standalone instead of ISP.
at September 10, 2010

Displays overlapping on Kubuntu 20.04 on Asus ZenBook with Nvidia GPU

The problem ScreenXpert overlaps the main screen when Nvidia MX250 is chosen as main graphics card. The same thing doesn't happen with I... 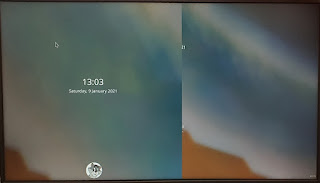